Warren Buffett famously said, ‘Volatility is far from synonymous with risk.’ When we think about how risky a company is, we always like to look at its use of debt, since debt overload can lead to ruin. We can see that Yoong Onn Corporation Berhad (YOCB) does use debt in its business. But should shareholders be worried about its use of debt?

What Risk Does Debt Bring?

Debt and other liabilities become risky for a business when it cannot easily fulfill those obligations, either with free cash flow or by raising capital at an attractive price. In the worst case scenario, a company can go bankrupt if it cannot pay its creditors. While that is not too common, we often do see indebted companies permanently diluting shareholders because lenders force them to raise capital at a distressed price. Having said that, the most common situation is where a company manages its debt reasonably well – and to its own advantage. The first step when considering a company’s debt levels is to consider its cash and debt together.

How Much Debt Does Yoong Onn Corporation Berhad Carry? 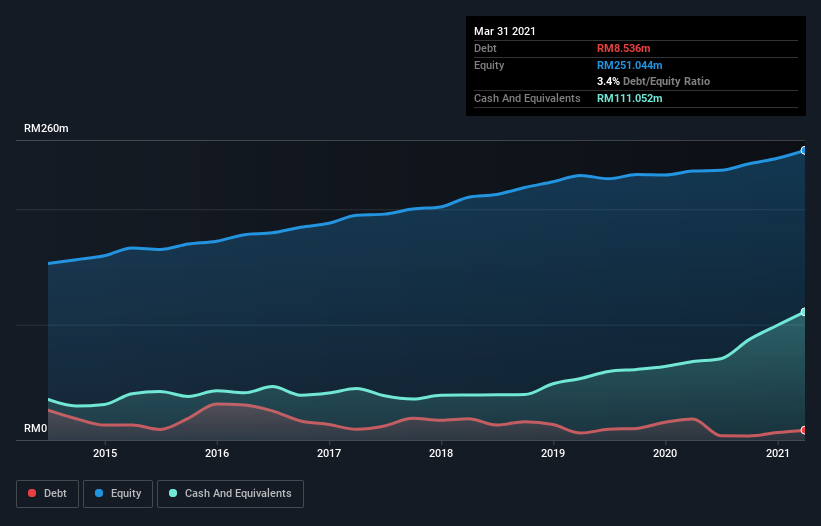 This surplus liquidity suggests that Yoong Onn Corporation Berhad’s balance sheet could take a hit just as well as Homer Simpson’s head can take a punch. With this in mind one could posit that its balance sheet means the company is able to handle some adversity. Succinctly put, Yoong Onn Corporation Berhad boasts net cash, so it’s fair to say it does not have a heavy debt load!

In addition to that, we’re happy to report that Yoong Onn Corporation Berhad has boosted its EBIT by 64%, thus reducing the spectre of future debt repayments. When analysing debt levels, the balance sheet is the obvious place to start. But it is Yoong Onn Corporation Berhad’s earnings that will influence how the balance sheet holds up in the future. So when considering debt, it’s definitely worth looking at the earnings trend.

Finally, while the tax-man may adore accounting profits, lenders only accept cold hard cash. Yoong Onn Corporation Berhad may have net cash on the balance sheet, but it is still interesting to look at how well the business converts its earnings before interest and tax (EBIT) to free cash flow, because that will influence both its need for, and its capacity to manage debt. Over the last three years, Yoong Onn Corporation Berhad actually produced more free cash flow than EBIT. That sort of strong cash generation warms our hearts like a puppy in a bumblebee suit.

While we empathize with investors who find debt concerning, you should keep in mind that Yoong Onn Corporation Berhad has net cash of RM102.5m, as well as more liquid assets than liabilities. The cherry on top was that in converted 139% of that EBIT to free cash flow, bringing in RM62m. At the end of the day we’re not concerned about Yoong Onn Corporation Berhad’s debt. When analysing debt levels, the balance sheet is the obvious place to start. But ultimately, every company can contain risks that exist outside of the balance sheet.

Research reference and analysis by Simplywallst

Japan Is Expected to Provide Asian Stocks a Boost, as the Yen…

Cukai Makmur, Increases in Stamp Duty May Have a Short-term Negative…

The Forecast for Bursa Is Positive for the Coming Week, With the KLCI…

As Inflation Fears Mount, Stocks Are Mixed, and the Dollar Is Weaker