Malaysia kept its benchmark interest rate at a record low Thursday, maintaining support for an economy that’s set to fully reopen in a matter of months.

Bank Negara Malaysia held the overnight policy rate at 1.75% for a seventh straight meeting, a decision expected by 23 of 24 economists surveyed by Bloomberg. One forecast a 25-basis point cut.

“Moving forward, the further easing of containment measures, rapid progress of the domestic vaccination program and continued expansion in global demand will support the growth momentum going into 2022,” the bank said in a statement announcing the decision. While the bank’s economic view remained cautious, language on the outlook was improved slightly, from “subject to significant downside risks” in July’s decision to “tilted to the downside” on Thursday. 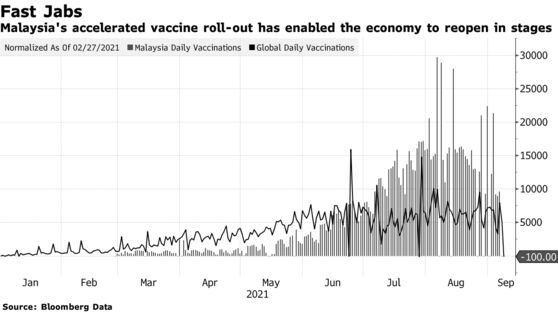 The ringgit was little changed after the decision at 4.1505 to the dollar. Yields on 10-year government bonds were steady at 3.24%.

“The rate hold decision continues to signal a high bar for the BNM to cut rate, even if it has left the options open still,” said Wellian Wiranto, economist at Oversea-Chinese Banking Corp. in Singapore. “Unless the domestic plan reopening plan comes asunder and the global demand slows down perceptibly, BNM will most likely stay the course from here.”

Malaysia’s swift vaccine rollout has allowed the government to ease virus curbs state by state and announce perks for the inoculated, even as infection numbers remain elevated. More than half of the population had been fully vaccinated as of Wednesday, paving the way for the government to reach its target of reopening all economic and social sectors by the final quarter of the year.

Even as the central bank saw downside risks to growth, the latest developments — a sharp pickup in vaccinations, a peak in infections, looser virus curbs, and still-firm energy prices — likely helped affirm the policy status quo. Our base case remains that its next move will be a hike in 2022.

To be sure, risks remain. Confirmed cases are set to breach the 2 million mark by next week, adding pressure to hospitals already running low on beds for Covid patients. The distribution of vaccines has favored the economic powerhouses of Kuala Lumpur and Selangor, with most other states trailing. And the government’s limited fiscal space could hinder its ability to support the economy if the national recovery plan goes off track.

Other points from the statement: