Asian stocks looked set for a steady start Friday as traders weigh the prospect of reduced central bank stimulus as well as challenges to economic reopening from the delta coronavirus variant.

Treasuries climbed amid the mood of caution and strong demand at a 30-year bond auction. The dollar was little changed in early Asian trading. In commodities, oil slid after China decided to tap crude reserves to ease a surge in energy costs. A broad rally in base metals markets gathered pace.

The Nasdaq Golden Dragon China Index edged lower after a bruising tumble in Chinese technology companies in Asia. Beijing’s crackdown on a range of private industries as well as possible steps to cushion the second-largest economy remain in focus for traders. 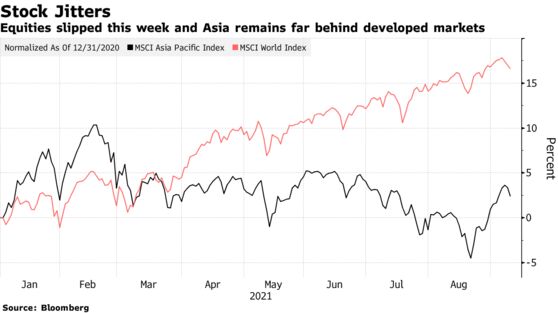 Investors have become wary of a backdrop of elevated inflation and slower economic reopening alongside looming reductions in central bank support. The European Central Bank said it will slow the pace of its pandemic bond-buying in the final quarter of 2021, but President Christine Lagarde added that didn’t herald a winding down in stimulus with the delta strain still posing risks.

There’s “a general feeling in the market that growth is slowing down in the U.S.,” said Chris Zaccarelli, chief investment officer at Independent Advisor Alliance. “There’s concern that what’s happening with the delta variant is impacting consumer behavior, potentially business behavior,” he said.