Oil Extends Advance as U.S. Supply Is Slow to Return After Ida

Oil climbed above $70 a barrel after a run of three weekly gains as investors tracked the slow restoration of supplies in the Gulf of Mexico and the outlook for demand and inventories in the fourth quarter.

West Texas Intermediate added 0.4% in early Asian trading after rallying 2.3% on Friday, pushing the U.S. benchmark to a slight gain for the week. More than two weeks since Hurricane Ida slammed into the key producing region, almost half of crude output in the U.S. Gulf of Mexico has yet to be restarted, according to the Bureau of Safety and Environmental Enforcement. 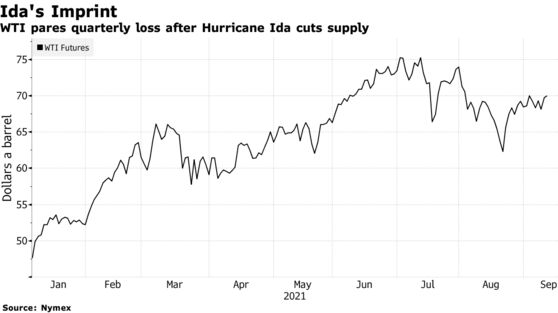 The disruption caused by the storm was an “unusual bullish shock” for the market, according to Goldman Sachs Group Inc. Ida was “unique” in having a net bullish impact on U.S. and global oil balances, spurring an estimated decline of 30 million barrels in inventories, the bank said in a Sept. 9 note.

Crude has pushed higher in recent weeks, paring a quarterly loss, as investors tallied the fallout from the powerful storm and the recovery in demand from the coronavirus pandemic. The commodity’s move higher has come even as the Organization of Petroleum Exporting Countries and its allies stick with a plan to steadily restore production that was shuttered last year.

The aftermath of Ida has left about 1.1 million barrels of daily production shuttered in the Gulf of Mexico and it’s unclear when that output will return, a bullish sign, according to Vitol Group, the world’s biggest independent trader.

Later on Monday, OPEC is scheduled to release its latest monthly assessment on worldwide supply and demand as inventories continue to ebb. Nationwide crude stockpiles in the U.S. have sunk to the lowest level since September 2019.

Brent’s prompt timespread was 68 cents a barrel in backwardation, up from 60 cents a week ago. That’s a bullish pattern, with near-dated prices trading above those further out.

The World’s Shippers Are Earning the Most Money Since 2008