Stocks slipped Monday and U.S. futures wavered amid challenges from the China Evergrande Group debt crisis and a Federal Reserve meeting this week that’s expected to hint at moving toward tapering stimulus.

Australian shares fell and Hong Kong futures were in the red earlier. U.S. contracts fluctuated after the S&P 500 slid the most in a month, testing the dip-buying psychology as the gauge jabs at its 50-day moving average. Markets in Japan, China and South Korea are closed for holidays.

Ten-year Treasury yields have risen ahead of the Fed meeting this week where policy makers are expected to start laying the groundwork for paring stimulus. Cash Treasuries won’t trade Monday in Asia because of the Japan holiday. The dollar ticked up.

Investors are waiting to see if indebted developer Evergrande will continue meeting obligations to bondholders. The offshore yuan was steady. 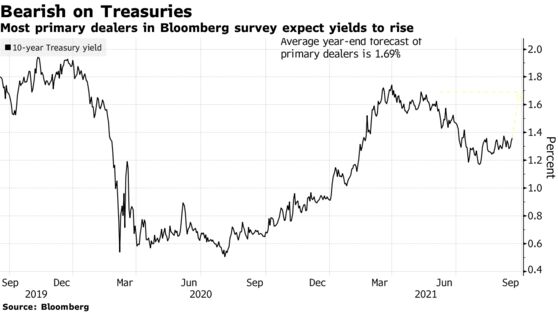 Aside from Evergrande and the prospect of reduced Fed stimulus, financial markets also face risks from uncertainty over the outlook for President Joe Biden’s $4 trillion economic agenda as well as the need to raise or suspend the U.S. debt ceiling. Investors were already fretting over a slowing global recovery from the pandemic and inflation stoked by commodity prices.

“It’s really going to be tied to when the tapering and how quickly it comes,” Knights of Columbus Asset Advisors President and Chief Investment Officer, Tony Minopoli, said on Bloomberg Television. “We don’t think the Fed’s really going to be able to telegraph that too much. We have inflation building in the system, wages are rising, supply chains firmly driving prices, and with so many central banks having to make rate decisions we think it’s a bit jittery.”

Treasury Secretary Janet Yellen said the U.S. government will run out of money to pay its bills sometime in October without action on the debt ceiling, warning of “economic catastrophe” unless lawmakers take the necessary steps. Meanwhile, central banks in Japan and the U.K. are also handing down rate decisions this week.

Elsewhere, iron ore will be closely watched after falling below $100 a metric ton for the first time in more than a year.

Here are key events to watch this week:

Some of the main moves in markets:

BlackRock Fund Manager Has Cut Almost All Gold From Portfolio