Asia’s markets are expected to open lower this week, as traders closely monitor China Evergrande Group’s debt issue and the pace of economic recovery. The euro lost some of its gains following a close German election.

Futures dipped in Japan, where the ruling coalition is expected to name a new leader this week who will most likely become the country’s next prime minister. Contracts remained stable in Australia and fell earlier in Hong Kong. Contracts in the United States remained relatively unchanged. The Nasdaq Golden Dragon China Index – which measures the performance of some of the Asian nation’s major companies listed in the United States – fell Friday. The S&P 500 nudged higher on Friday, eking out a weekly gain.

Additionally, investors will be monitoring bond yields. Ten-year Treasury rates surged over the top of a range that had been in place since mid-July, surpassing 1.40 percent and closing the week at 1.45 percent in response to hawkish statements from the Federal Reserve and Bank of England last week. In comparison to peers, the dollar was mediocre.

The euro lost ground against the dollar after the German election failed to yield a clear winner, stoking investor concerns about a protracted decision on Europe’s largest economy’s leadership. The Social Democrats’ Olaf Scholz edged ahead of Chancellor Angela Merkel’s conservatives.

Bitcoin remained stable in the early hours of Monday, trading above $43,000. Digital currencies fell sharply Friday as China stepped up its efforts to curb crypto speculation and mining. 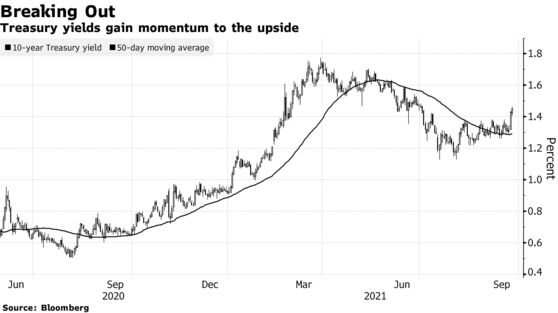 “Global concerns about Evergrande contagion have subsided somewhat, but it is still too early to declare victory,” Shane Oliver, head of investment strategy and chief economist at AMP Capital, wrote in a note. “Stocks continue to be susceptible to short-term volatility.”

Loretta Mester, president of the Federal Reserve Bank of Cleveland, stated that she supported beginning to reduce bond purchases in November. Esther George, her Kansas City counterpart, stated that “the criteria for significant additional progress had been reached,” referring to the central bank’s taper test.

China’s housing authority has increased control of Evergrande’s bank accounts to ensure money are used to build housing projects and are not diverted to pay creditors.

This week’s events to keep an eye on include the following: